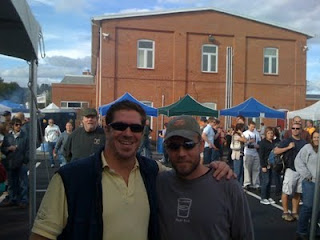 The Kennett Square BrewFest's session-strength Connoisseur Session happened two weeks ago, and it was a lot of fun...for most of us. Some very good beers: my favorite was probably McKenzie Brew House's Gringalet ("Weakling"), a 4%...I think Ryan Michaels said it was a 'French lager' with black pepper. I went back several times on that one. Flying Fish -- once they got there, the traffic just purely sucked -- had a real simple special; Casey Hughes took a keg of Xtra Pale Ale, dosed it with a brett culture, and let it sit on the brewery floor for a couple months (I think he said 'months'). Beautifully balanced, not nail-in-the-head funkified, and drink-o-matic. Erie Brewing had a Banana Nut Bread Brown that was dead-on to its name, and had a line most of the session. Stone brought Levitation Ale, Anchor brought Small Beer. Triumph had the GABF gold-winning Kinder Pils...but couldn't serve it, they hadn't realized that they needed two set-ups for the two different sessions, so I just went over there after and drank some. And there was another brewery there that was under the PA radar, so I won't name them, but their Summer Ale and Oatmeal Stout were brilliant, and I drank them more than once, too. Thanks for coming!

The picture -- two bums who insisted I take their picture* -- shows what a gorgeous day it was, after a thoroughly wet, raw, and nasty morning; it cleared up literally as I was walking down the hill to the fest grounds.

Now, about that "...mostly." The most common comment I heard during the session was "I didn't see the thing about session beers on the website!" There were people complaining about the session-strength thing, feeling like they'd been had because they weren't getting their big 'complex' beers. I actually felt bad: I didn't want anyone to be there under circumstances like that. Besides, they were taking up space that real session beer fans could have been in!

Otherwise? Plenty of folks were very happy about it. I drank so much I had to hit the heads three times in two hours, and never caught even the hint of a buzz. Well, maybe a little, after the main fest opened up and I was drinking Otter Creek imperial stout mixed with Wolaver's pumpkin beer. Yum. Groundhog's Kevin (hell, Kevin, I know your last name but I don't have a clue on how to spell it other than it's not "Crucial," sorry) gave me a bottle of spiced cider, and I was embarrassed to admit how much I liked it. But I did press it on a bunch of other people to taste, and they almost all liked it too...with a similar reluctance. We're all babies.

Anyway...was it a success? Yes. It could be better, especially if brewers gave it a better shot; some scrambled to throw something together, some just brought their regular sub-4.5% beers (not that I'd kick either Victory Donnybrook Stout or Sly Fox Chester County Bitter -- on cask! -- out of bed). Will Kennett do it again? Doubtful, because the reason they did it in the first place was to do something different. It wouldn't be different next year. So we'll look for another venue, or maybe try an idea Brendan at Memphis Taproom gave me...we'll see.

*Two bums named Spencer Niebuhr and Ric Hoffman, who, okay, are two of the coolest guys in the biz. The bums.
Posted by Lew Bryson at 3:08 PM