Brilliant idea from CAMRA (no, really!) 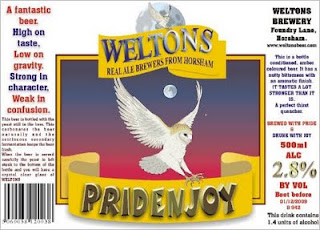 The Campaign for Real Ale has a fantastic idea they're pushing to the UK government, which is simultaneously struggling with the country's boozing problem (drunk youth violence) and imposing ridiculously high and unpopular taxes on beer (whilst claiming there's a connection between the two). CAMRA's brilliant suggestion: zero tax on beers that are 2.8% ABV or lower.

What? 2.8% ABV? Yes, really. CAMRA is showcasing Welton's 2.8% ABV Pride'n'Joy ("Strong in Character. Weak in Confusion.") at the Great British Beer Festival this week. CAMRA chief executive Mike Benner said: "Zero duty on low-strength beer is a win-win scenario for brewers, pubs and consumers. Low-strength beer can be packed with flavour -- low strength does not translate into a reduction in flavour. It also makes it easier for people to drink responsibly."

And with over 100,000 members, its biggest membership ever, CAMRA may have the voice to be heard. The organization estimates that the zero tax option would drop the price of a pint of 2.8% beer by about 60p, a substantial amount that should encourage folks to grab a pint of something reasonable -- and tasty.

Seriously, this is genius. I think the key to successful alcohol policy is not to merely punish folks for doing the wrong thing; we have to reward them for doing the right thing. You're drinking responsibly? Hey, we'll knock down the price of your beer! Question is: will the UK government put its tax policy where its mouth is?
Posted by Lew Bryson at 8:24 AM 7 comments: