As I've noted elsewhere, I'm back writing about beer and whiskey as a freelancer. That means more time to do Session Beer Project stuff, which means Session Beer Day 2016 is on!

Session beer has made a huge impact on American beer drinking in the past five years. We've made a difference, and people are drinking lower-alcohol beers, and loving them. Brewers are making them and succeeding financially; not all, but there are some notable successes, like all-session beer gypsy brewer Notch, which is going to be opening a real brick and mortar brewery this spring, shortly after Session Beer Day; congratulations! Yards continues to sell a LOT of their non-hoppy Brawler. Victory always has at least a dry stout and a delicious bitter at their taproom. Hell, Yuengling Lager is a session beer; that's pretty damned successful. (There's session elsewhere, of course: I just happen to be in Pennsylvania.) 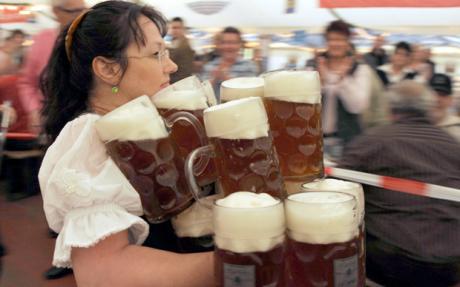 So...has the Project succeeded? Do we take a victory lap and happily shut down, liter mugs in hand, well-done, thou good and faithful servant?

The continued success of session beer in America — and yes, in the world, I'd argue — is threatened by two things. First, ABV creep, the same thing that got us here in the first place: a slow, persistent rise in the alcohol content of craft beers, leading to our call to offer some session beers as a real choice for beer drinkers faced with an increasingly 7+% tap array. We saw success there, but inevitably, ABV creep set in.

"Session beer" has become a trend and a desirable label, which makes it subject to overuse, much like "IPA." It is successfully being applied — as a marketing tool — to increasingly strong beers that are still under 6% but range as high as 5.5%, sometimes even more. Brewers may simply call these beers "session!" and move on, they may justify it with the lame (and somewhat worrisome) "that's 'session strength' for us!", but the fact is...yes, that seemingly small gap between 4.5% and 5.5% is significant. For one thing, well, this, Joe Stange's exposition on how drinking 5% beer will get you drunk significantly quicker than 4% beer. For another, 4.5% is supposed to be an upper limit, a ceiling, not a target! If brewers had some serious session skills, they could make deliciously drinkable beers at 4% and lower, not pussyfoot around at 4.8% and say, "Well, that's almost 4.5%, and it's really hoppy, so what's the difference?"

And that's the second thing: really hoppy. Like the rest of the non-mainstream beer category, session beer has been plowed under by the hop lovers: "session IPA" is an inexorable binding of two of the hottest brands that has crushed the possibilities for variety in this budding category, where the promise for variety was so sweet. American brewers have played it safe, gone with baby IPA as a sure thing, sticking with hops as the only tool in the box when it comes to customer enticement and ignoring the fact that the session beers of the rest of the world rely on all the ingredients of beer to make great lower-alcohol everyday drinking beers. It's a farce, nothing less, that American "craft brewing" continues to trumpet the self-congratulatory message of their vaunted innovation when their best idea for making a good, enjoyable lower alcohol beer was simply to make a lower alcohol version of the category best-seller, followed by a Cascading rush as everyone else then raced to imitate it. In case you didn't get it, let me note: that's about as innovative as the big brewers who made a lower calorie, lower ABV clone of their light lagers, called this even-lighter lager "light beer," and then raced to imitate each other. Is that what you've become?

Before "session beer" becomes a 5% IPA, I'm going to propose a challenge to the brewers who are innovative, who have the will and the skill to make something different and delicious for Session Beer Day 2016. This year:

Show Us Your Session Smarts!

If you're a brewer interested in participating, it's simple. The "session IPA" has taken over the American session beer category, when it was supposed to be a meta-category, a category that would include many different types of beer at 4.5% and less. Session beer awareness is supposed to be about increasing choices for the beer drinker...and we largely got one extra choice out of it.

Snap out of it! Take this opportunity to show off your skills and make a session-strength beer, 4.5% or less (you can do it; you can go lower!), that doesn't rely on shouting hops for all its character. We get it, brewers know how to make a light, wildly hoppy beer: EVERY brewer's doing it.

Be different! On April 7th, show us some real innovation, or some real skills to make a beautiful example of a classic session-strength beer that stands apart from the herd of 'monkey-see, monkey-do' dialed-down IPAs. Work with specialty malts or non-barley grains, a different yeast, light souring, smoke, herbs or spices, wood-aging, or sure, a light hand with the right hops, a pale ale, there's a thought. Make it tasty but not crushing, make it something "more-ish," as Michael Jackson used to say. Show the world you're not a monkey, thumb your nose at the "me too me too" crowd, and who knows...maybe find your next big seller.

If you accept the challenge, post a comment here, or send me an email (sessionbeerday@gmail.com), and let us know who you are, and where you'll be representing that beer on Session Beer Day, April 7. We'll help get the word out.

Bar owners/managers, beer stores, and yes, beer drinkers: we've got ideas for you too. The brewers need more lead time. Your suggestions for a successful Session Beer Day are coming up.

And if you feel threatened by this, or think that beer must be hoppy or else, or that only big beers have flavor, or that "session beer" is a fad that's over...your opinions are always welcome. Just try to keep them civil. Thanks.
Posted by Lew Bryson at 11:27 AM 7 comments: