You know how I know session beer is the smart new trend for craft brewers?

Because the big brewers are making higher ABV beers.

Check out this story in Ad Age. ABInBev and Miller Coors are betting big on boozier beers.


That appears to be part of the playbook for MillerCoors and Anheuser-Busch InBev, which have turned to pricier, higher-alcohol line extensions to recapture share from growing liquor brands. The latest entry: Miller Fortune, which will debut next year at 6.9% alcohol by volume with a marketing strategy aimed at luring millennial males during nighttime drinking occasions.

The brew, in the works for months, follows A-B InBev's recent launches of Bud Light Platinum and Budweiser Black Crown, which both check in at 6% ABV, compared with 4.2% for most light beers. The goal for brewers is to reach variety-seeking drinkers whose habits lead them to the liquor shelf and away from beers their fathers drank.

(Can anyone tell me what the latest sales curves are like on Platinum? Thought I heard they sucked. Oh, here it is: "Not Even Justin Timberlake Can Save Bud Light Platinum")

Guys, guys, guys...People don't want beer with more alcohol. They want beer with more flavor. And Bud Light Platinum doesn't have beer flavor, it has added flavor, artificial flavor. Session beers have real flavor, and that's what people want. Good luck with the big beers; you're only about eight years behind the curve.
Posted by Lew Bryson at 9:35 AM No comments:

Heard from a regular SBP reader recently (and not just any reader: Steven Herberger, the guy who designed our logo!) about something he heard at an industry celebration. I'll let him tell it.


Was at a 25th Anniversary tasting for the Milwaukee micro Lakefront recently, and a question was asked of founder/owner Russ Klisch: What do you see as the next big thing in craft brewing?
"I think more sessionable, lower alcohol, but highly flavorful beers are what you'll see next.  We're planning a highly hopped beer with a low ABV." (Not verbatim, but the gist of his answer.)

To which I replied, "That's great to hear."


Yeah, I know: he said "sessionable," and that's verbo non grata around here, but it's the gist of what he said -- as Steven put it -- that's important! That's another solid craft brewing figure who's of the opinion that session beer is the hot trend. Of course, Lakefront's summer seasonal, Wisconsite, is already at 4.4%, so he's putting his malt where his mouth is.

And let me just tell you...there's a LOT more people going to drink (and buy, brewers...buy) session beers than there are ever going to be drinking sour beers, the beer that most alpha beer geeks would note as the hot trend.  Sours have their place, and they're trending, and I love 'em (especially now as the weather's heating up again), but it's a niche. Session beer could blow things wide open.
Posted by Lew Bryson at 9:22 AM No comments: 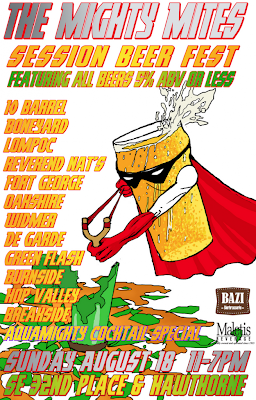 Nice piece about session beer from Houston Press Food Blog, all about drinking session beers in the summer heat. There's a plug for the Session Beer Project, too, and while the writer (Nicholas L. Hall) says he tends to "edge toward lenience, keeping things under 5 percent," he then interrupts his hymn of praise to Founders All Day IPA -- at 4.7%, as noted below -- to drop this in: "If they could sneak the alcohol down a half percent or so, this beer would be nothing short of miraculous." So I think he's really with us in spirit!

More press, more beers...I'm starting to think that my work here is done.
Posted by Lew Bryson at 2:27 PM 2 comments:

The first American beer company dedicated to brewing only session beers (to my knowledge, anyway), Notch Brewing, has signed a contract with Two Roads Brewing (a new brewery built to offer capacity to the new generation of contract/gypsy/whatever brewers) to ensure expanded, steady brewing capacity and canning capability. The story is here, on BrewBound.

Notch, which embraces the SBP's 4.5%-and-under definition of "session beer," has survived as a one-person contract brewer, and grown to 1200 bbls. in sales in its second year; owner Chris Lohring projects 2,000 barrels in 2013. He's hired his first full-time employee, former Narragansett marketing manager Zac Antczak. Zac did a fantastic job at Narragansett, and is already spreading Notch sales outside of the "beer geek" zone.

Well, you know? What can I say? This is fantastic news. Small, but fantastic. Add it to the news from Boulevard, Odell, Deschutes, Stone, and all the other brewers adding session beers, and we're looking definitely trending.