"...the very basic function of a Bitter"

Fantastic post by Chris Lohring of The Notch today, about brewing a batch of cask bitter. It's long, and detailed, but it's a great look into why "contract brewing" shouldn't be a bad word. This guy busted his hump to get a batch of beer brewed, fought problems both under and out of his control, and won through to a batch of German-malt, German-hopped bitter, under 4% and subtly dry...and there are some great bits of insight here.
Go read it. Thanks for all the hard work, Chris.
Posted by Lew Bryson at 1:02 PM 1 comment:

Drinking it up: I drink an afternoon of session and publicly post my BAC 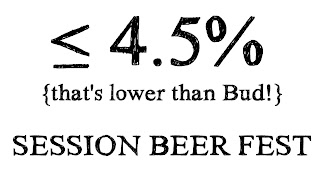 As posted below, I was involved in a session beer event at Farmer's Cabinet in Philly. Matt Scheller invited me to take part in what amounted to a session beer tap takeover: they have about 24 taps there, and Matt planned to have all but about four of them at 4.5% or lower (including some of Terry Hawbaker's new house-brewed beers), and those four would be 5.0% or less. And I was going to talk about session beers. 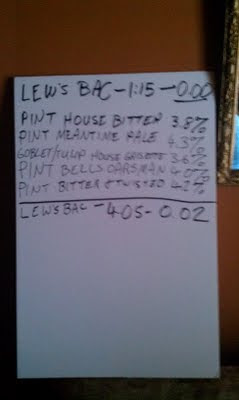 That was the plan...but it kinda fell apart, to some extent. Matt's suppliers let him down on some of the beers (including Coniston Bluebird Bitter, which was a -- urk! -- bitter disappointment for me), including some of the surprisingly low-ABV Mikellers. Bummer. Then, well, I'll be honest: not that many people showed up. At one point we had about ten, and that was the high for the day. So we just kind of sat around and chatted about session beers...and drank 'em.

I did do one other thing. I took along a piece of foamcore and a broad Sharpie, and put the whitesheet up on a shelf in the bar. I wrote "LEW'S BAC -- 1:15 -- 0.00" on it; my blood alcohol concentration at 1:15 was 0.00, according to my AlcoHawk Pro. I then publicly posted what I was drinking, with ABV. I thought I should put my money where my mouth was and, well, if my BAC was too high, I'd stay in the city till I was legal.

It wasn't even close. After five beers in about two and a half hours (I stopped drinking the proscribed 20 minutes before blowing), the AlcoHawk pegged me at 0.02 BAC, completely legal in Pennsylvania; I think I could probably have bought a bottle at a "wine kiosk."

And the beers? Pretty good! The House Bitter (Terry's) was tasty, but lacking in body. The Meantime Pale was chewy with British malt, a nice drop. Terry's House Grisette was delicious -- herbal, floral, dry on the end -- and had it not been for wanting to keep varietal, I'd have drunk much more of it. The Bells Oarsman was tasty without going overboard on the sour clench; quite refreshing. And the Harviestoun Bitter & Twisted was a nice solid glass to wind up the day with.

What did I learn? Well, maybe the format is not the best for promoting session beer. In fact, I'm starting to think that focusing on session beer doesn't work, because of session beer's character; it's a type of beer that's not about taste, taste, taste; it's more about drink/talk/drink/cards/drink/pool/drink/eat/drink/pool...Not what you do at a "Beer Festival." Need to think more about this.

But check this out. This was a two-day/all-day event, and the beers were simply on offer for regular customers, no entry fee needed. The bartender told us that Friday night the beers had been selling fine, and the place was packed, and they were all drinking, but...they never turned stupid or started acting like drunk jerks. Hmmm...another reason for bars to include more session-strength craft beer on their menu?
Posted by Lew Bryson at 5:17 PM 14 comments: