Sorry for the long silence; I was finishing a book, starting a new job, and getting through two massive events (WhiskyFest San Francisco and New York). I've been tweeting about the session beers I've had (@lewbryson), but haven't been able to post for a while. But this news brought me out of the hole:

North Coast Brewing, noted for big beers like Rasputin, Pranqster, and Stock Ale, has decided to celebrate their landmark 25th anniversary with a session beer! Here's the release, from BrewBound: 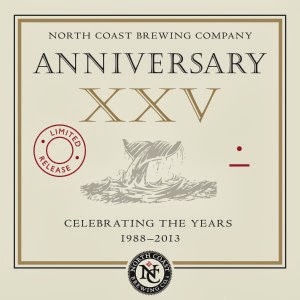 Fort Bragg, CA – In anticipation of long nights of celebration with the many friends we’ve made over the last 25 years, the brewers of North Coast have created a Belgian inspired session beer designed to promote a festive mood while minimizing the consequences of overindulgence.
Brewed with pale malts and fermented with the same yeast strain used to make Le Merle, our Twenty-fifth Anniversary Ale is sharp and spritzy with a delicious flowery, spicy dry-hop aroma. This limited offering (4% ABV) is available on tap at fine restaurants and drinking establishments. 750 ml bottles will be available at the Brewery Taproom and the Brewery Shop in Fort Bragg, California.


Add this to session beers being noted as one of three trends at the Great American Beer Festival this year,and the fact that I'm out tonight at a Pilsner Urquell event that celebrates and declares its session-strength nature (and drinkability), and you get more and more evidence of the acceptance of the session beer idea.

Once again: brewers, drinkers, marketers, please keep the meaning in "session beer" by using it only for beers at 4.5% and under. We got something going here, and it would be too bad to see it ruined by the same leveling as has hit "IPA," which these days apparently means nothing more than "with hops."