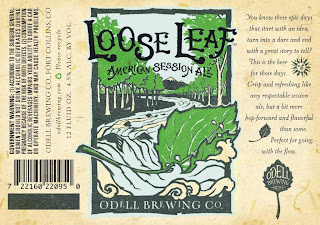 "Loose Leaf was developed on the brewery’s five barrel pilot system. The Odell brewers wanted to create a beer that was lighter in color, lower in alcohol content, but also flavorful and distinct. The final recipe is crisp and balanced with lower IBU's and a bright hop aroma. At 4.5% ABV, it’s delicate and refreshingly drinkable with a clean finish."

It's available in bottles as part of their Montage 12-pack, and on draft in Old Chicago restaurants in Colorado. Go get some!

Hats off to Drake's Brewing, Magnolia Pub, Mavericks, and the California Brewers Guild -- and Jay Brooks -- for ramming through Session Beer Month: this month, in California. It's loose, it's not overly organized, and it's mostly just brewers and drinkers saying that it is, without a big organized push behind it...perfect for session beer.

They've even come up with an interesting compromise on the ABV limit: 4.5% please...but up to 5% is being tagged as "extreme/imperial session beer." Well, look...that's okay, but I reserve the right to make fun of any brewer who isn't good enough to make a great-tasting beer that's 4.5% and under. Try harder next year!

I'm happy to repost the Manifesto for The Month, as writ by Kelsey Williams at Drake's (you know me, I'm manifesto-mad):

Beer lovers, we are in the midst of a revolution. We have thrown off the fetters of the fizzy yellows and clamored for change. To supplant the sameness, we sought and found the EXTREME. We now have Triple IPAs and World Wide Stouts, Bourbon Barrel Aged Imperials, Belgian Quads, and all manner of High Gravity beers stuffed with fruits, spices, malts, hops. We’ve reached for the outermost precipices of beer, and succeeded.


Yet, in our noble quest for more innovation and more experimentation we have flown past many classic, well-loved, craft beer styles that may have seemed, due to their modest alcohol contents, a little too close to the weak, yellow, fizz water we’d escaped.

We have left behind these beers of import, beers perfectly suited to a long conversation at the pub, a picnic at the park, a post-hike refreshment, or a mid-summer beach trip, and beers that one can happily imbibe over the course of a few hours and leave satisfied and still standing.

We call to you beer lovers. Do not disregard a well-made, flavorful Bitter, Mild, Scottish Ale, Dry Stout, or any other Session beer because you perceive a lower alcohol content as a sign of the weak and bland. Allow us to prove that these beers are worthy of consideration. They, just like the extreme beers, have their place in our fridges and on our local taps.

We declare the month of May for Session beers. Beers that need not be analyzed, dissected, sipped, or sniffed in abundance. Delicious beers that not only enhance a good conversation but can extend it through multiple rounds.

Raise a Pint. Raise a Few. Spread the word in May; Less is most certainly more.

Yes indeed. There's a Facebook page, and Kelsey is Tweeting at @SessionBeerMay (and you can always use the #sessionbeer hashtag).

Now get out there and have some fun!
Posted by Lew Bryson at 2:56 PM No comments:

Interview with Jeremy Raub of Eagle Rock Brewery in LA

Picked up this interview from my Google Alert on session beer. Jeremy Raub is making some session beers at the new Eagle Rock Brewery (other stuff, too, but Solidarity is a year-round at 3.8%). The interview is on the occasion of a session beer festival they're doing. It's 5.0% and under, which is too high for my definition, but I'll give them points for it...in southern California, it ain't that easy. Next year, maybe, they can ratchet that down some. Meantime, good interview, good ideas, and good press for session beer!
Posted by Lew Bryson at 12:14 PM No comments: