There is session whiskey, you dopes: we call it "cocktails." And St. George Spirits has a new whiskey designed for making the kind of cocktail I particularly like: 'tall drinks,' or highballs. It's called Baller, and it was made for mixing with a tall glass of club soda and ice.

So yeah. There is "session whiskey." This is what it looks like. Uh huh, huh.
Posted by Lew Bryson at 9:05 PM 2 comments:


"They say there's twenty-seven pubs from here to Odsal TopAnd tonight we'll have a pint in every one."

It's Session Beer Day. Go ye out and have some great session beers.

Places to go: I'll be at the Bulls Head Pub in Lititz, PA (World Session Beer Day Headquarters!) from noon to 6:30, feel free to drop by for their total session tap takeover, all beers under 4.5%, all beers $4.50 a pint! Deep Ellum on the Boston border is hosting the Notch crew again for small beer in big glasses. The Olympic in Rockford, Illinois has a bunch of session beers plus a cask of Stone Go To. Akasha Brewing has a variety of local session beers, and you can hook up with OG Beer Guy Roger Baylor for a Session Beer Day Brewery Crawl that winds up there. There's always session beer at the Victory pubs in Downingtown and Parkesburg (Penn.), and of course there's Yards Brawler and Philly Brewing Kenzinger all over Philly (Yuengling Lager is a session beer, too!) In the Bay Area? Magnolia  and Drake are always rocking some good session ales, as is 21st Amendment! See more? Tell us here!

FOR THE BEST SESSION BEER DAY, DO THIS:

Have fun!
Posted by Lew Bryson at 9:11 AM No comments:

Session Beer Gets New Attention in the UK as Well

I've been meaning to put up a link to this article for months; it came out in November of 2015! Seems like a good time. It's about Tweed Brewing Company, in Hyde, England, outside the Manchester ring road. They're focusing on lower-ABV beers, "reinventing the pint", and although they have beers as "big" as 5.0%, most of them are 4.5% and under.

I just love what they have to say about session beer's perception as "samey." Here's the start of the interview with co-founder Sam Ward:


Well, the idea of Tweed all started over a pint. Myself, Dave [Ward, Sam's father] and Anthony [Lewis] were all sat around talking about how session beers were so boring and samey. We all pointed out that if you wanted something quirky and tasty you had to start moving into the 5% plus beers, which we weren’t really into.
Anthony, being a commercial brewer by trade, said that session beer doesn’t have to be that way and went on to say that it’s all usually bitter and dry is because the customer in the pub wanted that… usually male drinkers.
We sat around and said that beer should be for everyone, men and women and also appeal to a younger drinker. Anthony went on to say that it’s very easy to keep a beer sweet and tasty and eradicate the dryness and bitterness.
And that’s really where the foundations of Tweed were laid. A brewery that was hell bent on reinventing the session beer.

Sounds good to me, although I'd note that having sweet and dry and bitter as choices is even better. But I love the idea that English brewers felt a need to re-invent the session beer. Goes with this excellent Gustav Mahler quote a friend made me familiar with today (thanks, Tom):


Tradition is not the Worship of Ashes,
but the Preservation of Fire.
Posted by Lew Bryson at 9:29 AM No comments:

I'm proud to note that we told you about Chris Lohring and his fantastic idea for Notch Brewing, an all session beer brewing project, first, right here on the Session Beer Project blog, six years ago this month. And ran an interview with him here, back in 2012. And I've talked about him a lot since then; naturally, it's a session beer blog, and Notch was the first American brewery to commit to brewing only beers at 4.5% and under. We've seen eye-to-eye since Day One, and that's why when Notch opens their Salem brewery this summer, the SBP — okay, me — will be there, live blogging, tweeting, and drinking their small beers in big glasses.

But this is about a GREAT interview done with Chris this month by Brandy Rand (in a magazine I've been writing for since 1998, Massachusetts Beverage Business, the trade book for the Massachusetts wholesale/retail alcohol beverage industry, and there are some GREAT articles on their website; you should check them out). Chris lays down some session beer basics here, and shows he's got a firm understanding of the new beer market. Check this stuff out (as always, the added emphasis is mine):


MBB: Session beer was a bit of an anomaly back then; what’s it like now to be a session brewer and do consumers finally “get it”?CL: Many do get it, and they are clearly driving our growth as more consumers step away from a “strength = good” perspective and become more knowledgeable. They understand and value beers of full flavor at a modest strength, they understand the benefit. But there is still the machismo consumer that drinks ABV as a badge.

CL: Brewing in my own brewery again [Chris opened Tremont Brewery back in the 1990s, and left brewing after it closed.] – it’s been a long time since I’ve done that. The creativity we will have here is unlimited. You’ll see a very large focus on German and Czech lagers brewed with  traditional methods, and as a brewer, this has me the most excited.

MBB: Explain your Single Series.CL: It’s a new beer brewed every month and draft only. You can’t ignore shifts in consumer preference, and “what’s new” has been influencing draft beer selection. In accounts that constantly rotate drafts, we always have something new to offer every month. Some are one and done, others come back each year with changes. The Single Series will also be available in cans later in 2O16 when our Salem brewery opens. And for a session-beer-only brewery, it’s allowed us to demonstrate the wide array of styles you can brew at under 4.5%.

MBB: You have over 18,000 Twitter followers; has social media been a big part of growing your brand? What has been the key to making it work for you?CL: Without question – it’s the great equalizer. Larger brands cannot compete with us being ourselves. We don’t program, we live our life in beer and share it with our fans. You can’t buy that, you need to live it. The consumer sees right through the larger brewer bull shit. The key? Being real. Having a point of view. Engaging in conversation. Not playing it safe. Not being contrived or obvious. Making fun of ourselves. Taking responsibility and ownership for everything we do.  Calling out BS. Defending our friends. Championing our supporters. Being a person, not a brand.

MBB: What are the biggest challenges you face as a small craft brewer in trying to grow the brand?CL: The stranglehold larger brewers have on distribution channels. When I say larger brewers, I’m not only taking about Bud, Miller, Coors, but the largest craft brewers. Some are publicly traded, others owned by private equity, some owned by Bud or Heineken, and they have enormous power in the marketplace.

And that's only part of it. Go read the whole thing, and get fired up for Session Beer Day! 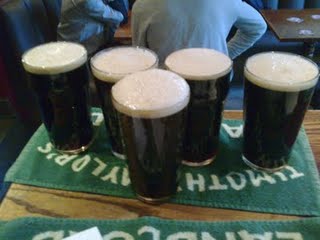 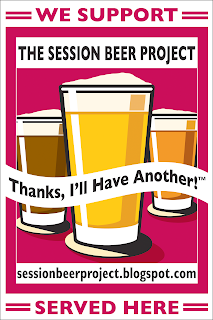 Just saw this piece in the Irish Times talking up Session Beer Day and the SBP! Kind of surprised not to see any mention of Guinness, or the new Guinness Dublin Porter in it, but hey, craft partisans will be craft partisans. Happy to see the word spreading; spread the word yourselves!

SMALL BEER IN BIG GLASSES!
Posted by Lew Bryson at 1:07 PM No comments: