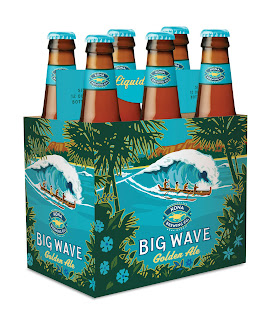 Just heard the following; session continues to roll on:

A longtime staple in Hawaii will soon make its way ashore, courtesy of Hawaii-born Kona Brewing Company. Big Wave Golden Ale will join Kona’s portfolio on the mainland that includes flagship Longboard Island Lager, Fire Rock Pale Ale and the trio of Aloha Series seasonals available at select times during the year. Brewed with tropical ingredients, the Aloha Series is comprised of Pipeline Porter, Koko Brown Ale and Wailua Wheat. Like Longboard, Big Wave Golden Ale will be a year-round offering starting August 13, 2012, and will be available in 6-pack bottles in all 30 of Kona’s mainland markets.

Kona Brewing president Mattson Davis said, “Big Wave Golden Ale is one of our original beers, first brewed at our Kailua-Kona home brewery in the mid 90’s. Like Longboard, it’s a great session beer with a bright quenching finish, and perfect for kicking back and talking story at sunset. For the tens of thousands of mainland craft beer lovers who have requested it, their day has come!”
Specs: