Smuttynose is coming out with a new 4.3% session beer called Bouncy House; it fits into the "session IPA" slot, but they're calling it an "All Occasion American Ale." I talked to Smuttynose brewer David Yarrington about it. 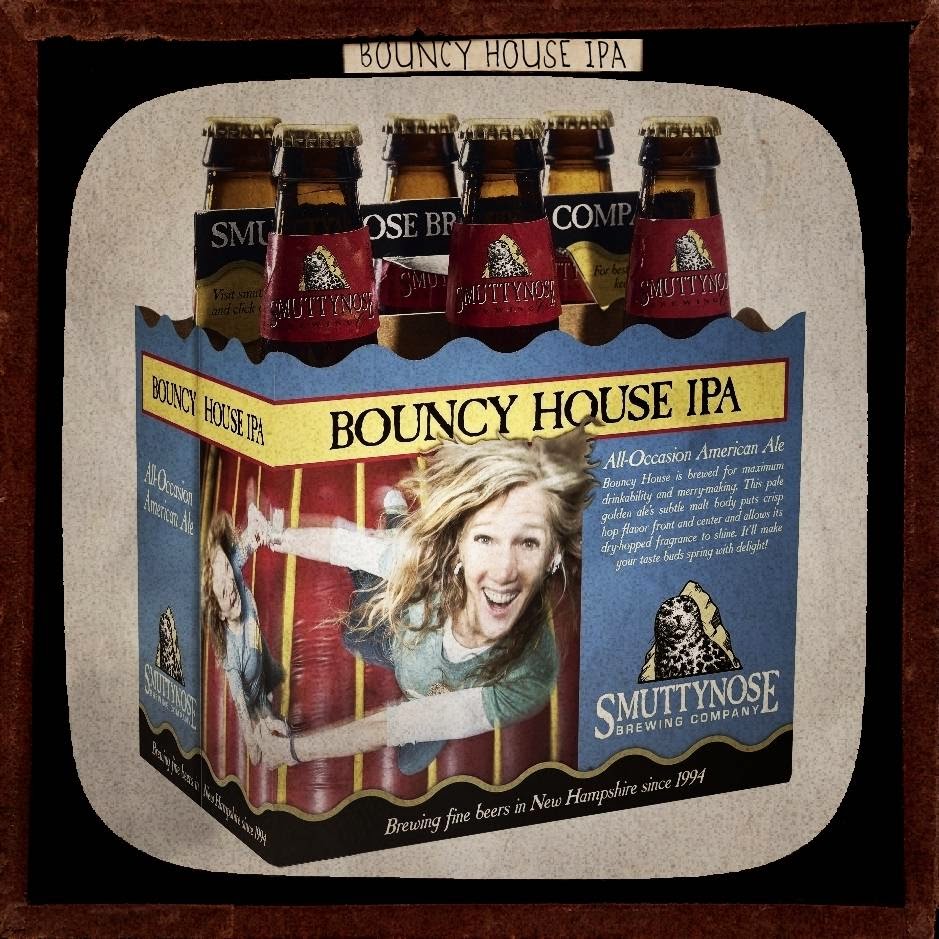 Fun name, Bouncy House. And I see you call it Bouncy House IPA, but the term "session IPA" is nowhere on the packaging.

It was named by Peter [Egleston]. We went back and forth about that. The decision was to just call it "All Occasion American Ale." In our marketing, we’ll tell people it’s a session IPA, but we wanted to design a beer that wasn’t just a fad, a beer a year from now, people will say, 'Oh, session IPA.' Even using IPA on the label was a back and forth. But anything we can do to stop confusion is good. People like fanciful names! Look at some of the beers people are talking about, they have an interesting name.

It’s a session IPA; the term people recognize, being a new style, how do you define it, and has it been defined? Isn’t it just an American pale ale?

We wanted to differentiate from that. There’s a fine line because it’s so low in alcohol and has such a thin body, it can become too bitter. We’re trying to push that line so it’s more than a pale ale. It’s hop-forward. A big part is the low ABV, it’s sessionable. [Oh that word!] When we did pilots, it came down about half a degree Plato in each batch. We wanted to get it in the 4.2-4.3% ABV range, but still have enough mouthfeel.

The last sample you sent me was at 4.6%, and I chided you about it; that's when I was told you were aiming below 4.5%, and this was a work in progress, looking at malt. What did you wind up with on mashbill?
The mashbill is our silo malt, an English pale, then Aromatic, Crystal 60, and Cara Hell. We wanted to add — the specialty malts are over 10% — more mouthfeel, didn’t want it to be thin, and a little color. We weren’t doing a hi-gravity beer; it starts at 10 P, so we wanted some complexity. Bittering is Magnum, we do a lot of Magnum. Flavoring is Calypso, aroma is a mix of Calypso and Saphir. We don’t know how much it’s going to sell, but we had to contract last year…and it appears that I cornered the market on Calypso! They asked me to release some of that back into the wild… Hey, look at me, I’m one of those guys who bought all the hops! But one of the effects of being as big as we are is that when I think about a new beer, [I have to consider]; if it catches on, am I using a hop that I can get enough of? Everyone wants Citra; what if it takes off? That’s why we like to blend dry hops, we could adjust it a bit if we had to. All those practical things the beer-drinking public doesn’t think about.

Would you have made a beer like this five years ago?
Interesting question. For me, there was always a desire… at some point in the evening, I’d take a High Life. Charlie Papazian has been vocalizing for session for a long time. But five years ago, could I sell it? People weren’t buying. I thank Charlie for advocating these beers. It would have been hard to sell this five years ago; people were talking about the proof of beers at the time! People were eating it up. If I were running a brewpub, that would be different, 7 barrels would sell out. But Smuttynose is at a different scale.
One of the things I find fascinating is that we’re all aging at the same rate. We all came in when we were younger and could consume a lot. But the vanguard of the industry is aging. I’m in my mid-40s, and I’m not the guy out there drinking 10 pints. It’s nice to have a choice to have a session, have a few beers, chat with people, and still get up and go to work in the morning. It dovetails in with a movement I’m starting to see to German beers. I think you’re going to see more of the lighter helles and kölsches; difficult to brew, but they have a delicacy and complexity. I think that’s going to mesh well with the session beer idea.

Making an imperial stout is easier than making these beers. We’ve all matured past saying that more alcohol and more flavor means more craft. I love dialing in a smaller beer, they show their imperfections. I don’t remember seeing beer snobs in the 1990s, but now, some of these places and people...wow. What I liked was that for five or six dollars you could have the best beers in the world. I like wine, but I’d never be able to afford to be a wine snob! I thought that was part of the appeal. But now this seems to be part of the beer snob.

We're told we don't have a beer culture here in America. Could craft session beers change that?
For years, anyone who came back from England said; wow great time, drink those beers, and have a great time drinking in the pubs. I went, and I totally get what they’re talking about. They’re easy, anyone could sit there all evening. It’s so well-suited for having conversation and a few beers. I hope that’s what we’re moving to. It’s interesting to see other beer cultures and how they go about it. America still has some of that bingeing, some of that Prohibition feeling of ‘this isn’t right, so I better get it done.’ You don’t want people to see you drinking, and that’s a shame. I spent some time in Japan, and one of the things I love is that it’s always shared. You buy a large format bottle for the table, and you don’t pour your own beer; you top off other people’s. It’s a group experience.