Why I called Sierra Nevada "wieners" about their Nooner Session IPA 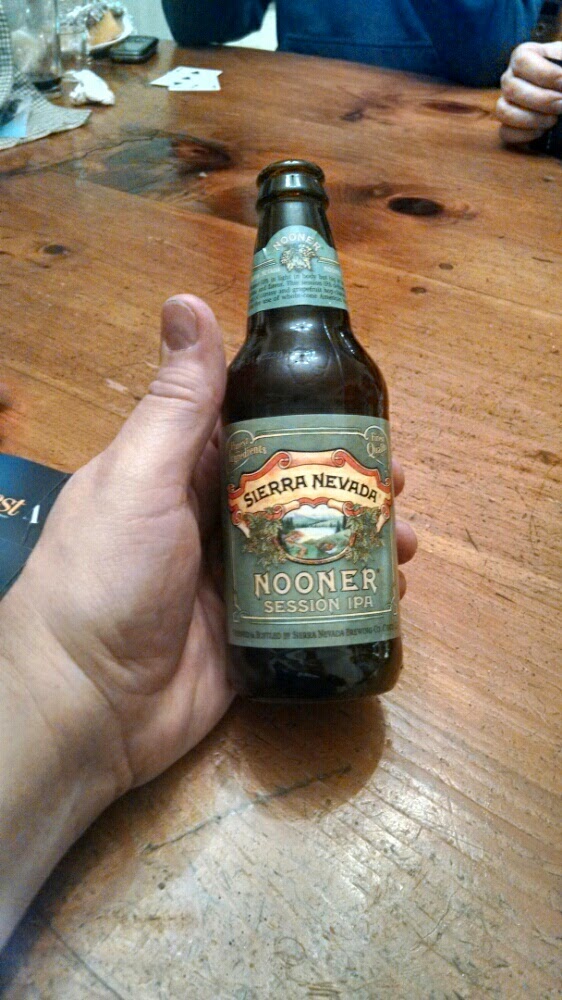 That's what I put up on Untappd* two days ago as my "review" of Sierra Nevada's new "session IPA," Nooner. If I felt really bad about it, or that I was out of line, I'd apologize. This is Sierra Nevada, after all; a brewery and a founder, Ken Grossman, which I honestly revere(and still do), one of a small pantheon of people and companies who can honestly be said to have started or substantially advanced what we generally call craft brewing.

And on Saturday, I called them "wieners."

I don't intend to apologize, because I think I'm right. But I do intend to explain, beyond saying, 'well, you know, I was pretty well into the day at that point, pints of draft, some whiskey, and maybe I was a little jovial.' Which I was, but I stand with Papa Hemingway on this: 'Always do sober what you said you'd do drunk. That will teach you to keep your mouth shut.' Or not. Yeah, I had been drinking, but I'm sticking by what I said, and here's why.

"Session IPA" is becoming a selling point, but it's an ill-defined "style" (and yes, that word bugs me some days, but let's work with it for now) at best. Look at the Smuttynose Bouncy House I just posted about earlier today: 4.3%, and they sidestepped the "session IPA" label. Their beer is a hoppy pale ale, but that's not why they didn't call it a session IPA. They did it because they thought it might be a played-out trend in a couple years.

I agree, and that's why, as I said in an interview with the good people at Craft Beer Cellar, the 4.5% bright line is important:


...not so much because of the alcohol. It’s because of the worth of the label. If “session beer” just means “as little as 0.1% ABV less than ‘regular beer’”, it starts to lose meaning. Session beer has to be significantly less than a regular beer in alcohol content. 4.5% is 10% less alcohol than 5.0%; that’s significant. I want it to mean something, and to continue to mean something, so I’m going to be picky.
We weren’t picky about what “craft beer” meant — Is it about who makes it? What it’s made of? What it tastes like? — or what an IPA is (it’s apparently anything someone chooses to call an IPA), and those terms are losing value. I don’t want that to happen to session beer, so I’m using every bit of influence I’ve earned over 20 years of writing about beer to try to fence it off. Making 4.5% a bright line and calling any brewer — like Sierra Nevada, even — to task who calls their beer “session” when it’s more than that, is part of the job. I’ll take flak. There will be backlash. Okay. It’s worth it. This was thankless in the beginning; I can handle it.


Maybe I wouldn't have called Sierra Nevada "wieners" if I hadn't been drinking, but...hey, they called it 'Nooner' first! So I'm not completely off there.

I'm actually getting more concerned about the lame groupthink and sheep mentality represented by "session IPA," especially since it's Sierra Nevada. I really expected something better from a brewer that has produced an iconic, leading Pale Ale, Barleywine, American Stout. I expected a brilliant Bitter, a fearless Mild. But we got a following beer from a brewer that's a leader. I expect better.

I expect better from the whole industry. I should be happy on Session Beer Day, and to some extent, I am! It's great, we're seeing a LOT more session strength beers from notable brewers, and more and more of them at brewpubs. But...an unending parade of "session IPA"?


I think it's significant that the brewer who's become something of the standard-bearer for the Session Beer Project, Chris Lohring at Notch, said this about his own session-strength IPA, Left of the Dial:


So, after all that, how does it taste? Like an IPA, but without any cloying sweetness and booze that fatigues and gets in the way of multiple pints and extended good times. Call it a Session IPA if you want, but to me it’s simply the IPA I’d like to drink, and I think Notch fans would like to drink.

Which makes me think of his Notch Pils; it's not a good session pilsner, it's a good pilsner. So if your beer is a good IPA, call it an IPA. If it's a pale ale...say so. And if it's a bitter, well, God bless you.

Here's hoping for a better selection next year. Now get out there: still plenty of time to get some rounds in. That's where I'm headed. Cheers! Drink small, drink often!


*And thanks so much for not dropping a Session Beer Day badge on us this year, Untappd. I know, I know, we don't have the money to pay you, and those badges cost you...no, wait, they don't cost anything, they're virtual. What the hell, Untappd?
Posted by Lew Bryson at 5:56 PM